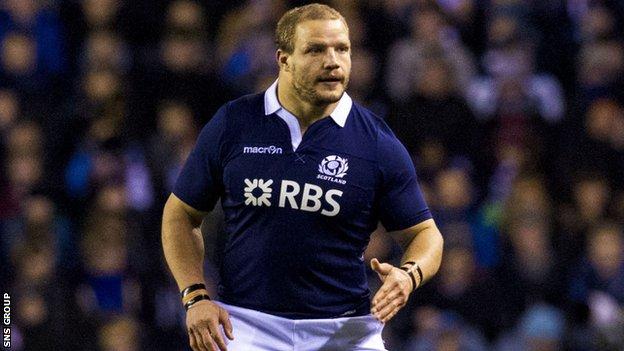 Experienced prop Euan Murray is among three forwards called up for Scotland's final match of their summer tour against South Africa next Saturday.

The 33-year-old, who signed for Glasgow Warriors this week, is joined by new club-mates Tyrone Holmes and Adam Ashe.

With Murray joining the squad, Gordon Reid, who has played in all three of the victories on tour, will return home for a rest.

"We're adding to our back-row resources for next week, while, at the same time, trying to give the Commonwealth Games sevens squad as much quality preparation as possible," said head coach Vern Cotter.

"I'm looking forward to working with Euan, Tyrone and Adam and for the squad to build on what has been achieved so far on our summer tour."

Johannesburg-born Holmes joined Glasgow in 2012, qualifying for Scotland through his Peebles-born father, while Ashe is a Scotland Under-20 international and is yet to start a game for his club.

Friday's 21-19 win over Argentina means Cotter has a 100% record since taking over, following successes in USA and Canada.