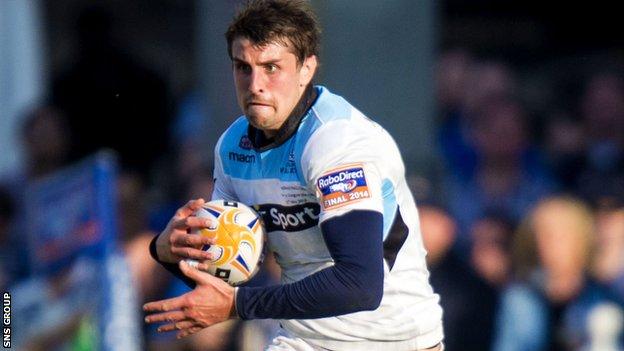 Scotland are aiming to finish their summer tour on a high, following wins in USA, Canada and Argentina.

"We have to go out and give it everything we've got," Glasgow full-back Murchie told BBC Scotland.

"We'll just have to take it to them right from the whistle because if we wait for it we could be a few scores down before we get going."

Murchie, 28, won his first cap against South Africa last June but picked up a shoulder injury against Italy in the following tour match, meaning he was sidelined for the November internationals and this season's Six Nations.

On returning to fitness, he proved an important player in Glasgow's run to the Pro12 final, keeping Stuart Hogg out of the starting line-up.

Murchie has little recollection of his first encounter with the Springboks, a match Scotland led 17-11 after 48 minutes, only to lose out 30-17.

"You try to soak it in but you are just so focused that I don't really remember a huge amount about it," he explained.

"We played pretty well and got ourselves into a winning position but let it slip, so there was disappointment at missing out on what would have been a famous victory."

Glasgow won nine games in a row before they were swept aside by Leinster in the Pro12 final, with Murchie playing in all but one of those encounters.

"I feel I've really developed over the last couple of years with Glasgow," he added. "The intensity we are playing at in the bigger games is good preparation for Test rugby."

"It was a physical battle," the lock recalls. "I was knackered and sore after the game.

"The general type of South African rugby is confrontational up front, kicking the ball from 10 to the back three and making you play out, putting pressure on your defence.

"They have added a bit more recently and they have a couple of exciting backs."

South Africa have included five uncapped players in their match-day squad against Scotland, having released several big-name players after their 2-0 series win over Wales.

"You take out a couple of experienced guys and that means you get younger guys coming in who are full of exuberance and with a point to prove," added Swinson, who won his eighth cap as a replacement against Argentina.

"We've won three Tests in a row, which is fantastic, and are really pushing on for a good finish to the season."