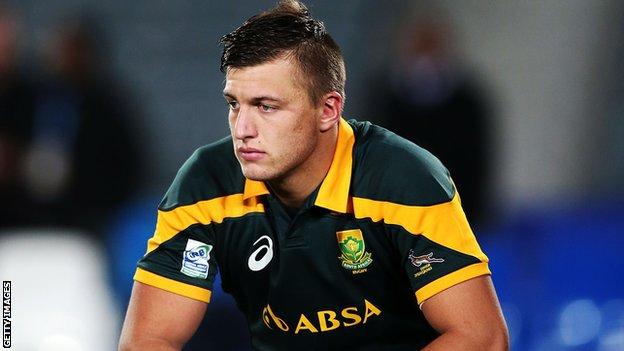 Handre Pollard will receive his first South Africa cap when he starts at fly-half against Scotland in Port Elizabeth on Saturday.

The IRB Junior World Player of the Year is one of five uncapped players in Heyneke Meyer's match-day squad.

There are six changes to the Springboks' XV that started last weekend's 31-30 win against Wales.

Winger Lwazi Mvovo and flanker Schalk Burger are among those coming into the hosts' starting line-up.

Pollard, 20, captained South Africa to second place at the Junior World Cup in New Zealand, losing out in the final to England last week.

"Handre is a very talented player and has a big opportunity this week, but he'll have (scrum-half) Fourie du Preez's experience next to him, while he's played a lot with (centre) Jan Serfontein before," said head coach Meyer.

"Our plans had always been to try a few new combinations this week against Scotland and I'm looking forward to see the guys grab their opportunities."

Scotland failed to score a point in their last meeting with the Springboks, the visitors powering to a 28-0 success at Murrayfield last November.