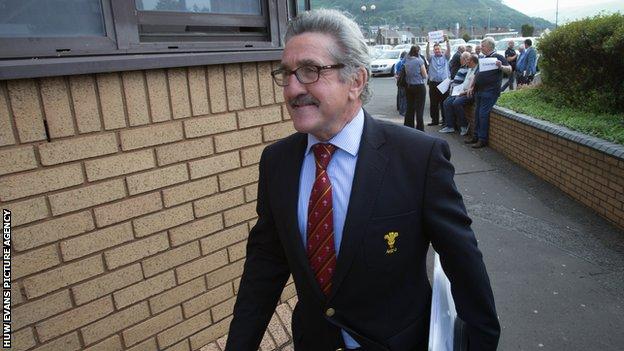 Former Wales wing Gerald Davies will not seek re-election to the Welsh Rugby Union board.

Davies, who won 46 caps for Wales and represented the British and Irish Lions, joined the WRU board in 2005.

In a letter to WRU member clubs, the 69-year-old wrote: "I shall not be seeking re-election for another period.

"I do so with considerable sadness because rugby union football has played such an important part in my life as a player and administrator."

The WRU overwhelmingly survived a vote of no confidence at the meeting.

During his speech, board member Davies said the WRU was "not held in high regard".

WRU chief executive Roger Lewis later said it was "very big indeed" of Davies to admit his responsibility for some of the reasons behind the calling of the EGM.

In his letter to clubs, Davies added: "I have always believed and stated that as rugby changes so its organisation must also change and develop for the common good of all.

"He's been a strength in Welsh rugby for a long, long time and his experience with the Lions and the IRB and we can ill afford to be losing men of his calibre.

"I was somewhat disappointed [at his announcement]; surprised maybe not. I think after hearing him at the EGM and his concerns for the game - for the way in which it was run in Wales - then maybe he's deliberated on that and thought about it and has decided that he hasn't got the time to put into it anymore."

"I do not wish to sever my ties completely with rugby and will constantly look for opportunities to encourage and support the game that is so dear to my heart.

"I will watch with interest how the WRU meets the many challenges ahead.

"As the custodian of this wonderful game in Wales it has a huge task and I wish those who follow me onto the union every success in the future."

A governing body statement read: "The Welsh Rugby Union would like to express its gratitude to Mr Gerald Davies for his great contribution to the union and rugby during his nine years on the board of directors.

"We are sure you would all join the board of directors in wishing Mr Davies its sincerest best wishes for the future."

Regional Rugby Wales (RRW), which represents Scarlets, Ospreys, Newport Gwent Dragons and Cardiff Blues, they were "united in wishing our respectful thanks to Gerald Davies for his dedicated work for the good of Welsh rugby on the WRU Board for the best part of a decade".

RRW added: "As a true legend of our game in Wales, he continues to be a valued and respected ambassador for Welsh rugby around the world and his influence and input will always be appreciated by all those connected with Welsh rugby.

"As one of our Welsh rugby greats, Gerald has worked passionately for the whole game, with the integrity and honour you'd expect of a British and Irish Lion and our players, coaches, partners and executives wish him all the very best for the future."

Davies played for Llanelli, Cambridge University, London Welsh and Cardiff and also represented the Barbarians during a glittering playing career.

Governing body chairman David Pickering and Martyn Davies, who has special responsibility for financial affairs, were the two other national representatives who were also re-elected alongside Davies in 2011.