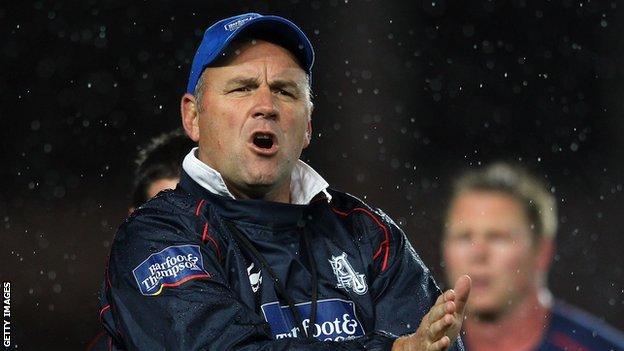 Easterby, 38, is to leave the Welsh region after two years in charge to become Ireland's new forwards coach.

Worcester backs coach Howarth is a former assistant coach at Auckland - the side Pivac left to join the Scarlets.

"He coached with Auckland and I think won three championships in a row down there and for people up here it's a pretty tough competition.

"He's also had international experience with Fiji and he's had a head coach role so he understands what it takes to be a head coach.

"Wayne knows his rugby. He's very meticulous in what he does and he's very good around the forward pack."

Reports have linked Pivac with succeeding Easterby at Scarlets, where the backs are coached by former Wales wing Mark Jones.

Danny Wilson, now coaching at Bristol, has remained as a part-time Scarlets scrum-coach while Mark Tainton is their kicking coach.

New Zealander Pivac was appointed Scarlets assistant coach in May to work alongside Easterby, who will now leave the region to join Ireland's coaching team.

Former Ireland flanker Easterby will take over as forwards coach from John Plumtree, who has stepped down from the role to return to New Zealand.

Stephen Jones, the ex-Scarlets, Wales and Lions fly-half, says former team-mate Easterby will be missed by the region.

"You just look at the commitment that Simon has given to that region as a player and as a coach," Jones said.

"He worked very hard and put great structures in place and was very popular with the players. He will be missed."