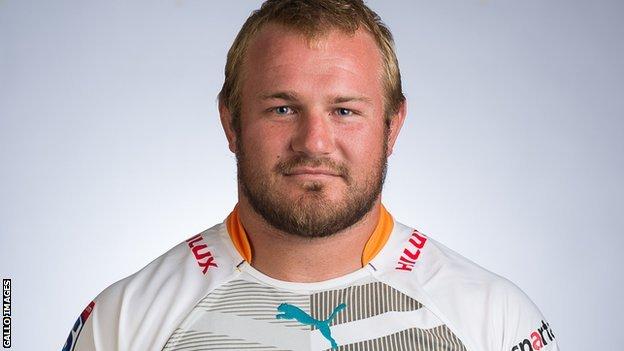 Glasgow Warriors have agreed a deal with South African Rossouw de Klerk - and the 24-year-old becomes the third prop they have recruited this summer.

He will make the switch from Super 15 club the Cheetahs provided he passes a medical and receives a visa.

De Klerk said: "I'm expecting tough competition to get into the team, but that is a great challenge and something which really motivates me."

British and Irish Lion Murray returned to his homeland from Worcester, while compatriot Allan switched from Edinburgh.

De Klerk becomes the Pro12 club's fifth addition of the summer, with the others being centre James Downey, previously with Munster, and scrum-half Murray McConnell, who was with Ayr.

"It's always been an ambition of mine to play for a European club and I'm looking forward to going over to Scotland later this month and meeting my new teammates in Glasgow," said the South African.

Tight-head De Klerk began his senior career in Pretoria, making his debut for the Blue Bulls in 2009 and switching to the Cheetahs last year.

He made 14 appearances in the Vodacom Cup and Currie Cup and has played seven times in Super Rugby this season.

Warriors head coach Gregor Townsend said: "To get a tight-head of Rossouw's quality into the club is fantastic and he'll add depth and competition to our front-row.

"Playing in that position, you know you're going to play a lot of rugby throughout the season and Rossouw already has a lot of experience for a 24-year-old.

"He has come through Super Rugby with the Cheetahs and, prior to that, the Blue Bulls and those two teams are renowned for their scrummaging.

"Rossouw is also very good in the loose and a strong tackler and has already played more than 20 games in Super Rugby."