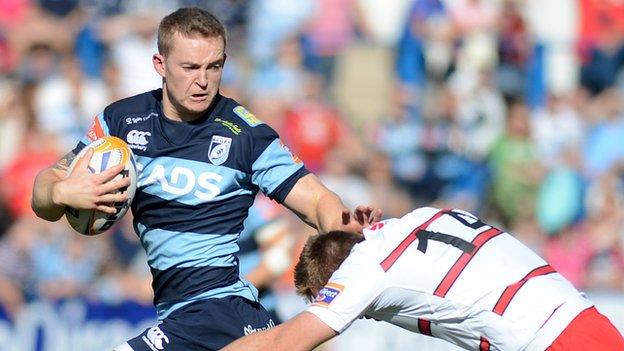 The Welsh leg of the Premiership Rugby Sevens Series will double as a fund-raising event to support Owen Williams.

The round-robin games will be held on Saturday at Cardiff Arms Park, the home ground of Williams who suffered a serious spinal injury in June.

The 22-year-old was injured playing for Cardiff Blues in the World Club 10s in Singapore and is now at Rookwood's specialist spinal rehabilitation unit.

Fifty pence of every ticket sold will go to the trust helping Williams.

The Welsh Rugby Charitable Trust was set up to support players and their families who have been severely injured whilst playing rugby in Wales.

Chief executive of the Blues Richard Holland said: "We've already had an overwhelming response to the #StayStrongForOws campaign which will raise funds for Owen via the Welsh Rugby Charitable Trust.

Scarlets winger Kristian Phillips will captain a side containing summer signings Michael Tagicakibau and Rory Pitman, who are expected to make their Scarlets debuts.

Ospreys will be led by Wales Sevens international Ross Jones, and include young full-back Morgan Williams and the more experienced Morgan Allen.

Newport Gwent Dragons also include a player with huge experience on the international Sevens circuit, with the goal-kicking Rhys Jones named in their squad.

The top two regions will qualify for the series final against the top two teams from the other three groups at the Twickenham Stoop on 8 August.

The winner of that will go on to play in the World Club Sevens on 16 and 17 August, also at Twickenham.