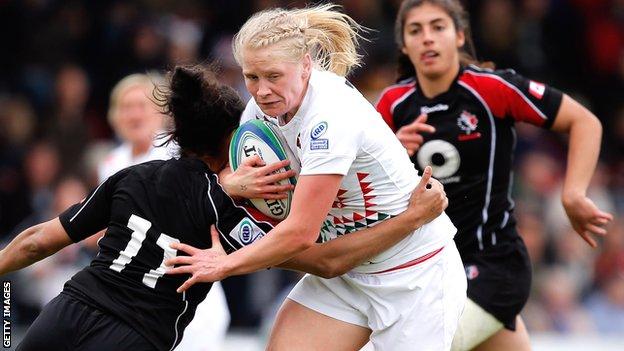 Richmond back row Alexandra Matthews will make her first start for England since July 2013 in Tuesday's World Cup match against Spain in Marcoussis.

The 21-year-old is one of 12 changes to the starting XV from Friday's opening 65-3 win over Samoa, as coach Gary Street rotates his squad of 26.

In addition to the introduction of Matthews, the pack features an all-changed front row of Claire Purdy, Victoria Fleetwood and Sophie Hemming, with lock Rebecca Essex and flanker Marlie Packer also starting.

In the backs, scrum-half La Toya Mason teams up with Ceri Large at half-back, with captain and fly-half Katy Mclean rested. Amber Reed and Claire Allan form a new centre partnership, with Kay Wilson starting on the right wing.

"Because of the schedule [five games in 17 days] it's key that we rotate our players," said head coach Gary Street. "Having a game every four days is hugely physically and mentally demanding so our strategy is to rotate the squad and keep the players fresh.

"It is exciting to bring back Alex Matthews who has been out for a while with injury. She has been outstanding in our training camps over the last couple of months. Alex is a dynamic ball carrier and gives us another huge physical presence in the back row."