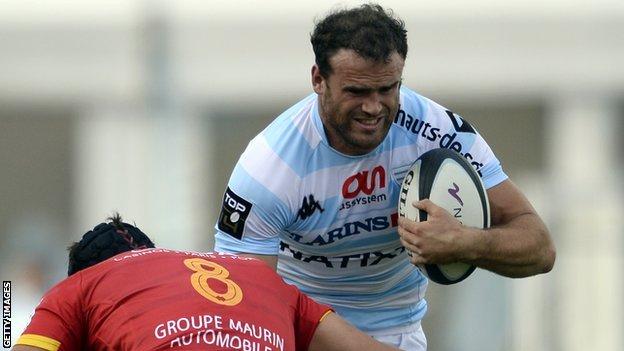 Wales centre Jamie Roberts says he would like to return to the Cardiff Blues before the end of his career.

The two-tour British and Irish Lions star, 27, has two years left on his contract with Racing Metro and says he is happy in France.

But before retiring, Roberts dreams of rejoining the Blues, who he left in 2013 to move to Paris.

"Long-term, I'd love to be back in Cardiff at some point," Roberts told BBC Wales Sport.

Roberts joined the French Top 14 club from Cardiff Blues ahead of the 2013-14 season after completing his medical training.

They have since been joined in Paris by another Lion, scrum-half Mike Phillips, while Wales lock Luke Charteris has arrived from relegated Perpignan for the 2014-15 campaign.

Having reached the 2013-14 Top 14 play-off semi-finals Roberts is relishing his time in France, but one day he would welcome a move back to the Arms Park, where he spent his whole career before joining Racing.

"Whether that's after this contract or a bit later, I'm not sure," said Roberts.

The Blues will be coached this year by New Zealander Mark Hammett, the long-term successor to Phil Davies, who left during last season.

Roberts added: "There's some great people involved with the club [Blues] at the moment, some great players and some great youngsters coming through.

"I think they're a team on the up with a new coaching set-up, and it would be great to hopefully play a part in their success in future years.

"But I'm not looking beyond this season. It's a massive year for club and country, certainly with the World Cup next year."

Roberts is eager to prolong his Wales career for as long as possible, and Racing's willingness to give the medical graduate full release for internationals was integral to his decision to join them.

Having lost to eventual champions Toulon in last season's Top 14 play-offs, Roberts says the target for this campaign is to emulate the double European champions, who also won the French title last season.

"We had a fantastic end to last season and this season we hope to go two better and win it, but it's tough," said Roberts.

"Certainly I'm enjoying my time. I'm enjoying the banter with the guys and travelling France - that's what life is about.

"Ultimately, I'm enjoying improving as a player. I want to play for Wales as long as I can and win things with Racing Metro."