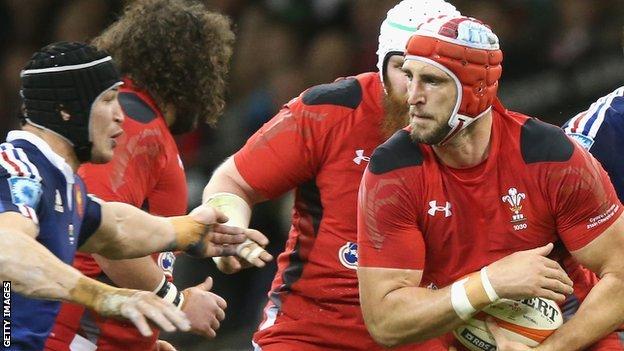 Wales lock Luke Charteris says the ongoing dispute between the Welsh Rugby Union and the nation's regions helped sway his decision to remain in France.

Charteris, 31, left relegated Perpignan for Racing Metro at the end of the 2013-14 season.

But the stand-off meant a joint WRU-Newport Gwent Dragons contract was not feasible for the 6ft 9in Charteris.

"The Dragons came in and made me an offer... but all along I wanted to go back on a central contract," he said.

The 48-times capped player was keen to return to Wales with the 2015 World Cup in mind.

But he said hopes of a deal with the WRU did not materialise, leaving Wales captain Sam Warburton as the only centrally contracted Wales player though he could go into the new season without a team.

"They were trying to sort out a central contract for me and that is something that I would have liked to have done, especially in the run-up to the World Cup," added Charteris.

"Unfortunately that did not work out - it was not an option.

"To be fair, the Dragons came in and made me an offer and I was very appreciative of that.

"But all along I wanted to go back on a central contract and have that sort of flexibility, or just stay in France because I loved my first two years over there and I wanted to carry on with that."

And while a return to Wales will not happen, Charteris said the "unreal" atmosphere at Top 14 games is absent at most games involving the Dragons, Cardiff Blues, Scarlets and Ospreys.

He also hinted a return to Wales at the end of the 2015-16 season was unlikely.

"The atmosphere in the games is unreal," he explained.

"And I think, unfortunately, that is something that is definitely missing in the club game back in Wales and, as a player, that makes a massive difference.

"I'd like to stay in France - it is just the lifestyle and everything outside of rugby that is so good here.

"There are not many jobs where you get to travel around and live in other countries, so I want to make the most of it for as long as I can.

"So hopefully I will extend here or stay in France."