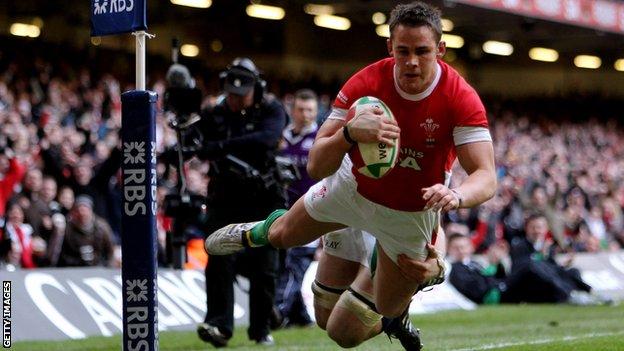 Byrne has been named captain at Rodney Parade after signing on a two-year deal from Top 14 side Clermont Auvergne.

But the 34-year-old has not played for Wales since 2011 and was omitted from Wales' Six Nations squad earlier this year.

"There's no doubt about which level he could play at," said Jones.

Maybe it's two or three years too late for me

"He's a top quality rugby player, he's got that experience and he's as fit as he's ever been.

Byrne was recalled to the Wales squad for the 2013 Six Nations when Robert Howley deputised as head coach with Warren Gatland leading the Lions to Australia.

However, the former Scarlets and Ospreys star did not add to his 46 caps as Wales successfully retained their title.

But Jones has been impressed by the 2008 Grand Slam winner since his move to Rodney Parade.

"Within three weeks of training it became apparent he was the standout leader here," said Jones.

"Off the field he has really set the standard and we hope to see that on the field, which we'll obviously get from a player of that experience.

"[The players] are following his lead - he's been exceptional."

However, Byrne says he is not holding out much hope of a Wales recall.

"Maybe it's two or three years too late for me," said the 2009 British and Irish Lion.

"I'd snap it up with both hands [if the opportunity comes], but whether it arrives or not I don't know.

"We'll have to see how the season pans out.

"I'm just here to enjoy myself at the Dragons."