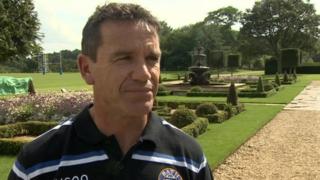 Bath 'will not change Burgess'

Bath head coach Mike Ford tells BBC Points West they are "determined not to change" England rugby league international Sam Burgess when he makes the switch to the 15-man game.

Burgess will arrive at the Rec in October from Australian National Rugby League side South Sydney Rabbitohs.

Bath expect the 25-year-old to begin his rugby union career as a centre, and Ford says they want to find a game plan in which the player will "excel".