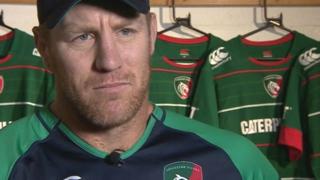 New Leicester Tigers signing Brad Thorn tells BBC East Midlands Today he has not lost any of his passion for playing rugby and wanted one final season before calling time on his career.

The former All Blacks second rower, 39, has joined Tigers for the 2014/15 season, but will not fit for the opening game of the season against Newcastle Falcons on Saturday.