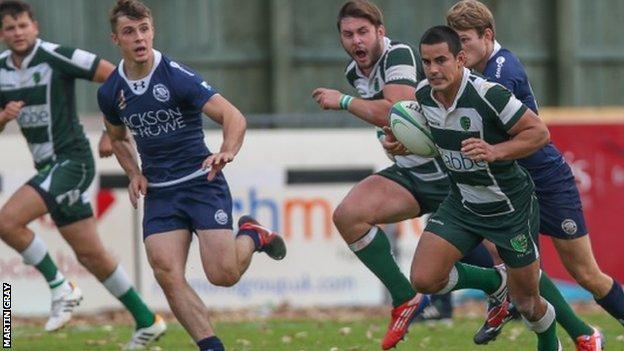 Guernsey head coach Jordan Reynolds wants his side to stay focused after gaining a first league win on Saturday.

They held off an East Grinstead fightback to win 33-28 at Footes Lane.

"We have a fantastic team the problem is sometimes we fall asleep a little bit," Reynolds told BBC Guernsey.

"It's about keeping that focus and making sure every team gets the same punishment that East Grinstead did. I'm very proud of the side. It's put us back in the hunt, which is fantastic."

Guernsey, who lost 37-7 to Westcombe Park in their opening league game, led by 19 points before two yellow cards allowed East Grinstead back into the game.

Reynolds added: "We had a big discussion before the game about how we're going to lead this club and we said we had to do it with performances and not cheap talk. The guys went out and absolutely did that.

"We've now got to keep a solid focus and keep that enthusiasm."