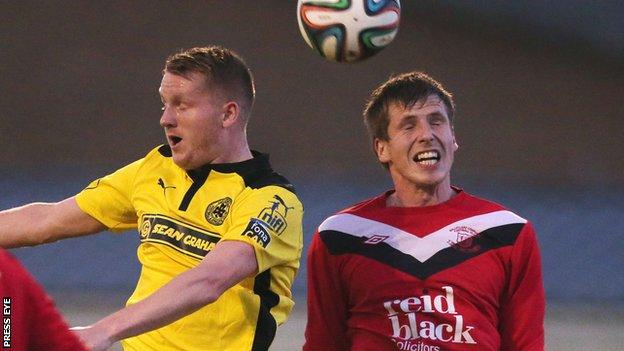 Cliftonville cruised into the Co Antrim Shield second round after a 5-2 win over Ballyclare Comrades at Dixon Park.

The Reds were 2-0 ahead after just four minutes with Stephen Garrett and Tiarnan Mulvenna on target.

Garrett completed his double with a superb strike into the top corner and James Knowles fired in the fourth.

Adam Gray pulled one back with a volley but Knowles hit the bottom corner before Samuel McIlveen netted a late consolation for the Championship side.

The Premiership champions were eager to bounce back from Saturday's home defeat by Coleraine and they made a blistering start.

Garrett drove into box and supplied the finish for the opener before Mulvenna slotted into the botton corner for his first Cliftonville goal.

The visitors continued to threaten with Tomas Cosgrove and Mulvenna going close while a penalty appeal was turned down after a challenge from Comrades keeper Paddy Flood on Garrett.

Reds keeper Ryan Brown made a great save to tip Gray's shot round the post before Randal Reid headed wide for Ballyclare, who were aiming for another big scalp after beating Linfield in the League Cup last month.

Knowles squandered a back-post chance before Garrett's fine goal made it 3-0 on the stroke of half-time.

The fourth came a minute into the second half courtesy of a Knowles free-kick, with Gray volleying in four minutes later.

Knowles netted again on 66 minutes from 20 yards although a beaten Ballyclare side remained positive and threatened in the latter stages of the tie.

Kyle Buckley's fierce drive flew just over and McIlveen saw his long-range shot saved by Brown before he completed the scoring two minutes from time by slotting beyond the keeper.