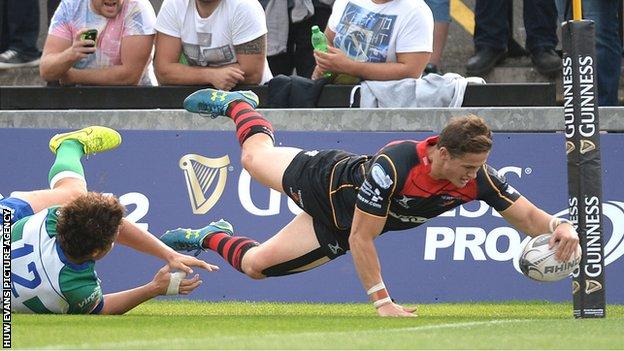 Newport Gwent Dragons secured their first win of the season and a bonus point at the expense of Treviso.

A patchy display saw the Welsh region score tries early in each half, but fail to maintain their momentum.

Hallam Amos crossed twice in the first 12 minutes, with Ashley Smith and Jonathan Evans clinching the bonus point five minutes after the interval.

Mat Luamanu and Leo Avua'a scored tries for Treviso who have lost their four games this season.

The victory will be a relief for the Dragons coaching team after their 33-13 capitulation at home against 14-man Glasgow the previous week.

At the start of each half Lyn Jones' team looked dangerous, stretching the Treviso defence with fly-half Jason Tovey exploiting mismatches in midfield.

His break set-up the second of Amos' tries after the wing had earlier intercepted a wayward pass and run 70 yards for the opening touchdown.

But after Tovey kicked his second conversion in the 12th minute, the Dragons did not threaten to score again in the first half with Joe Carlisle kicking a penalty for the Italian side.

The Dragons started the second half at a pace, with Smith rounding off a series of attacks and Evans taking a scoring pass from captain Lee Byrne who had picked a pass off his toes brilliantly.

But, just as the floodgates appeared ready to burst, Dragons flanker Andy Powell was yellow-carded for a wild tackle and the Italians exploited the extra man to hit-back.

Luamanu crossed from a front of the lineout move and then replacement Avua'a crashed over from short range as Treviso's rolling maul tactics paid dividends.

But any jitters in the home team were calmed when Tovey kicked a second penalty and the Dragons finished on top with the fly-half adding a third penalty.

However, head coach Kingsley Jones felt his team were naive against Treviso's limited tactics in the second half.

And the Dragons will face a much tougher examination when they face a trip to face then Scarlets in Llanelli.

Dragons coach Lyn Jones said: "We're obviously very pleased with the outcome of the match, we put lots of very good rugby together.

"There's lots of areas for us still to improve on, but we're very happy where we are at the moment at this stage of our development.

"We don't want the results to take the focus away from the performances.

"We took a step forward today and it's just better when we have first team players, experienced players coming back from injury - it puts a different shape on the Dragons."