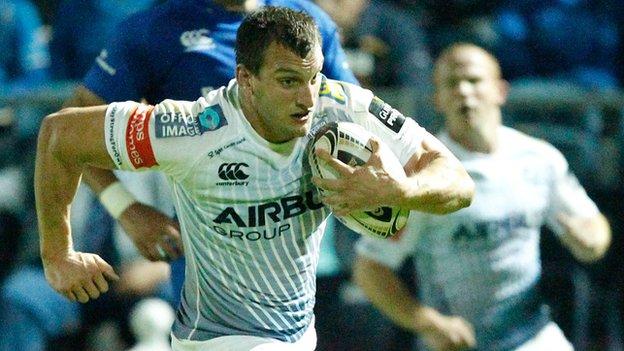 The Wales captain can play 16 games for the Blues in 2014-15 under his dual contract with the Welsh Rugby Union.

"It doesn't matter who you are as a player... sometimes your top internationals stop getting coached and stop being challenged."

Warburton has already played three games this term and after the Pro12 trip to Connacht on Friday, they go to Liberty Stadium to take on Ospreys on Sunday, 14 October.

The revamped European competitions kick off the following weekend and Blues host French club Grenoble at the Arms Park on Saturday, 18 October in the new European Challenge Cup.

Hammett says that like New Zealand captain and flanker Richie McCaw and Brad Thorn - the veteran lock now playing at Leicester - Warburton is as much in need of guidance as anyone.

"I haven't met a player yet, including your Richie McCaw's and Brad Thorn's and those boys... that didn't really appreciate sitting down and going over the finer parts of their game and having some assistance rather than being talked to about the wider team.

"It's really important to me that those players continue to get those work-ons and that assistance."

Warburton had been the only player to take up a WRU central contract, but his new deal means the Union pays 60% of the deal and the region the remainder.

The 25-year-old played in the opening Pro12 game at Zebre and then the following week against Glasgow but was rested for the game against Ulster.

Newport Gwent Dragons head coach Kingsley Jones, a former Wales flanker and captain, has said Warburton is unlikely to play his full quota of games for them this season.

Warburton could play in four Wales Tests in November and be back in national colours for the 2015 Six Nations that will stretch from 6 February until 21 March.

Assuming the Blues will want the open-side to play all six pool games in Europe, that leaves just another seven games that he can play for his region.

Should the Blues qualify for the knockout stages in Europe that would again cut into the number of Pro12 games Warburton will be available to play.

Wales coach Gatland has still to reach a final decision on which other players will be offered dual contracts, with a figure of eight to 10 having been mooted.