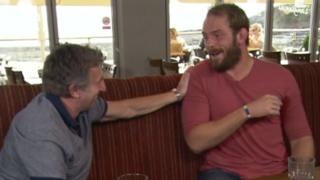 The 29-year-old lock, capped 80 times by Wales, tells the former Wales captain about life in general and why he thinks the Ospreys are doing well.

You can see more interviews with Welsh stars on Scrum V Highlights, most Sundays on BBC Two Wales, bbc.co.uk/scrumv and on the iPlayer.