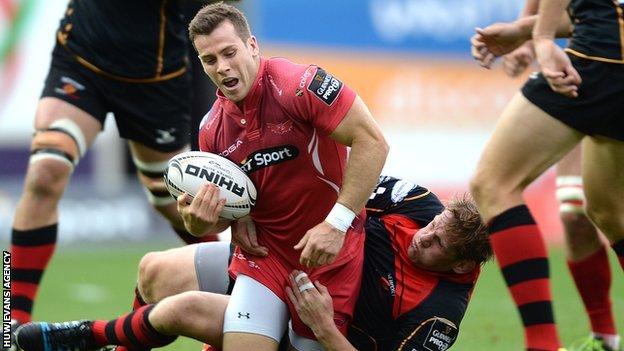 Wales scrum-half contender Gareth Davies is an injury worry ahead of their autumn Tests.

Davies was in a knee brace after coming off in Scarlets' 26-13 Pro12 win over Newport Gwent Dragons on Sunday.

Scarlets team manager Garan Evans said Davies had "a swollen knee" and will undergo scans when the damage settles down.

Davies, 24, made his debut as a replacement for veteran Mike Phillips on their June tour to South Africa.

His chances of putting more pressure on 87-times capped Racing Metro star Phillips, 32, could be damaged if he is ruled out for any period of time.

Davies returned against Dragons after missing their heavy win over Treviso in the previous round because of concussion.

Another Scarlet, Rhodri Williams, was the third half-back on the summer tour.

Davies and Williams had their chances to impress as Osprey Rhys Webb recovered from knee surgery.

Webb has since returned to form and fitness with the unbeaten Pro12 high-fliers.