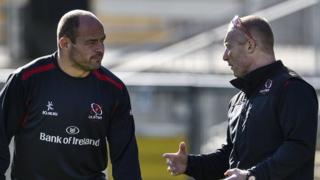 Skipper Rory Best says the Ulster players will be "delighted" if Neil Doak is appointed as new head coach at Kingspan Stadium.

"If he was announced as head coach, it would be a decision that would be greatly welcomed by the players."

Ireland assistant coach Les Kiss has been interim Director of Rugby at Ulster since the summer departures of David Humphreys and Mark Anscombe.

However, current attack coach Doak has been strongly linked with an elevation to the head coach position.