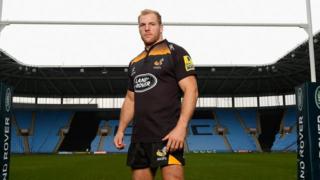 Wasps director of rugby Dai Young and club captain James Haskell are both excited for the future after the club announced it will move to Coventry in December.

Young says he is delighted to be moving to a "world-class facility" that will help the club both retain and attract top players to the club.

Haskell reiterates how close the club came to disappearing and says he and his players are excited about playing at the Ricoh Arena.