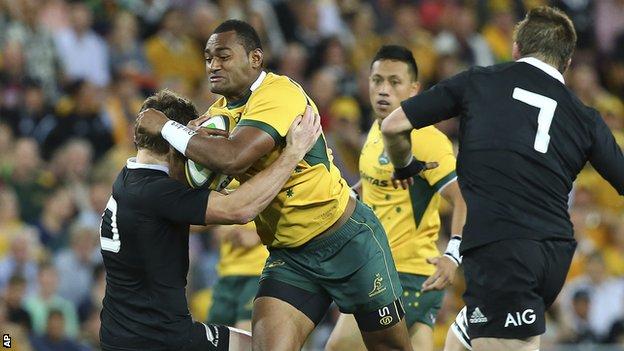 A last-minute converted try from Malakai Fekitoa secured New Zealand a one-point victory over Australia as they won the Bledisloe Cup series 2-0.

The All Blacks were trailing 25-15 after 60 minutes and 28-22 in the dying seconds of a thrilling Brisbane match.

But Fekitoa burst through a gap to touch down and Colin Slade held his nerve to slot the conversion.

Following the game, Australia coach Ewen McKenzie resigned, less than one year before the World Cup.

The Wallabies have now lost three Tests in a row following defeats by South Africa and Argentina in the Rugby Championship.

Australia led 15-12 at half-time after tries from Nick Phipps and Bernard Foley, while Corey Jane and Dane Coles went over for the visitors.

The Wallabies opened up a 10-point gap when Adam Ashley-Cooper wriggled over to mark his 100th Test with a try that was converted by Foley.

After a penalty apiece, Aaron Smith scored for New Zealand and Barrett added the extras to move the All Blacks within three points.

"The boys had to dig pretty deep," said New Zealand captain Richie McCaw. "We showed great composure at the end."

New Zealand had already retained the Bledisloe Cup with a 51-20 win in Auckland, following a 12-12 draw in Sydney at the start of the Rugby Championship.