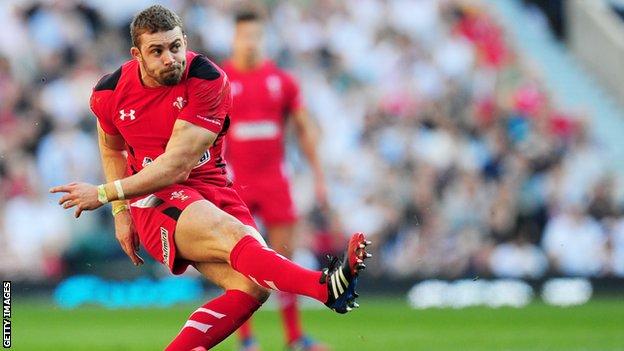 Wales and British and Irish Lions full-back Leigh Halfpenny has insisted he is happy at Toulon.

But Halfpenny, 25, told BBC's Sport Wales his sights are on winning "everything" with the European champions after making his debut.

"I'm here to stay... I'm here to make a success and to do my job for Toulon," said Halfpenny.

"I'm here to be part of such an exciting club and exciting team and a great group of players here."

The Welsh international announced in January that he was moving to France from Cardiff Blues, but had not played since injuring a shoulder in Wales' 29-18 defeat by England in March.

He was seen as Toulon's natural place-kicking successor for Jonny Wilkinson following the former England fly-half's retirement at the end of the 2013-14 season.

However, his delayed debut upset Boudjellal until the issue was resolved following talks in September.

On Sunday, he finally made his debut for the French Top 14 side in the 21-10 defeat against Toulouse and is in line to play against the Scarlets on Sunday.

The match against the Welsh region is in European rugby's new top club competition, a tournament Halfpenny's new club are targeting.

"The success that they've achieved in last couple of years, that was something that attracted me," he said.

"The ambition of the club is what excited me. They want to win everything and that really motivated me and excited me coming here."

The Welshman was man-of-the-tournament as Wales won the Six Nations Championship in 2013, and man-of-the-series for the British and Irish Lions on their triumphant tour of Australia the same year.

He scored a record 49 points was the Lions beat the Wallabies 2-1 in the three match series.

And Halfpenny has notched 395 points in 52 matches for Wales since making his debut in 2008 as a winger, though he did not take over as their main goal-kicker until the 2012 Six Nations.

Watch the full interview on Sport Wales on Friday at 19:00 BST on BBC TWO Wales and on the iPlayer