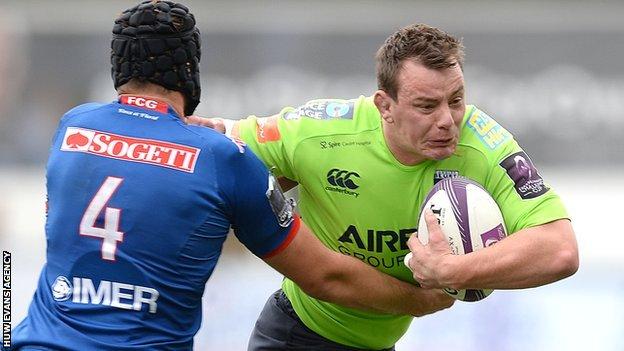 The visitors made 12 starting changes and suffered against hosts who were determined to kick-start their season after poor Pro12 form.

Rhys Patchell and Lloyd Williams went over in the first half and Sam Warburton, Richard Smith and Josh Turnbull followed.

Patchell was also on target with the boot, kicking three conversions and two penalties as he again impressed, this time at centre before switching to his favoured fly-half spot late on.

The visitors made 12 starting changes to continue the French trend of making domestic competition their priority over Europe's second-tier tournament.

That gave the Blues the chance to build confidence after one win and a draw in their six Pro12 games.

Patchell sliced through for the Blues' opener and scum-half Lloyd Williams added his name to the scoresheet in the 12th minute.

Back-rower Turnbull came off the bench to make his mark and Marrou ensured Irishman Hart was not the only sign of Grenoble resistance as he touched down for a consolation try.

Blues will go to Italian second-tier side Rovigo in round two on Saturday, 25 October expected to post another telling win.

And if that happens, the crunch games for Mark Hammett's are likely to come in back-to-back December clashes with London Irish.

The Exiles' campaign gets underway against Rovigo in Reading on Sunday, 19 October.

Cardiff director of rugby Mark Hammett: "It was great to get a win at home. I thought it was our best performance of the season. Our combinations went well

"The difference is often small in rugby when it comes to winning and losing. Today we held ball for long periods of time and sometimes you don't get over the line when you do that, but what you do is take it out of the opposition.

"I thought it was a good game against side who had made a lot of changes. We did what we needed and I am pleased for the boys."