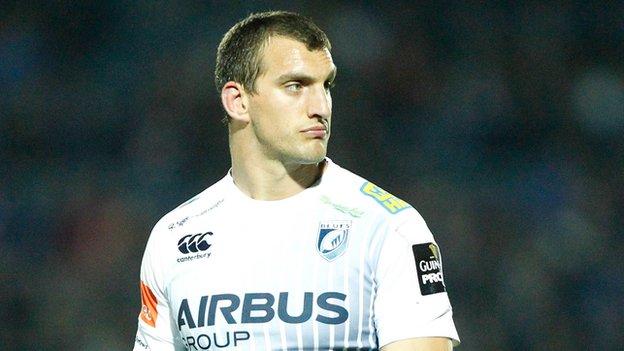 Wales captain Warburton scored one of the hosts' five tries.

"I think one try was about 22 phases… and we put ourselves through that pain in training. We keep working, keep working on our shape, getting back on our feet," he said.

"And it's extremely tough to do in attack, but then if you find it hard in attack the defensive team will be struggling a lot more.

"So it's nice to put pressure like that on the teams and whenever we were going in their half we were getting points."

Warburton says after losing 26-15 to Ospreys in their final game before the revamped European tournaments began, he and his team-mates focused on their work-rate.

He said: "The focus point for us this week was the work-rate in attack and D (defence); attack - getting off the floor and re-loading and the same in defence.

"And I just thought we played for each other a lot more this week; our attitude just to get back on our feet and play and really sort of up the tempo against this French side.

"And it went our way that the pitch paid dividends for us there," he said.

"We wanted to spread it wide and we got a lot of tries, which was great to see."

Blues travel to lowly Italian side Rovigo in round two on Saturday, 25 October.

Warburton may not play in that game as Wales' November Tests against Australia, Fiji, New Zealand and South Africa loom.

But he believes Blues can "kick on" in Europe's second-tier competition.