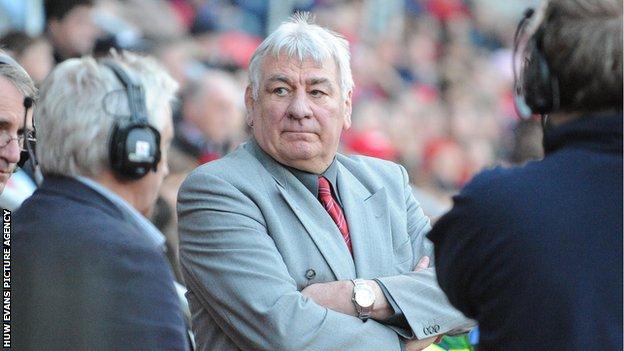 Llanelli-born Gallacher was until recently chairman of Regional Rugby Wales, and had also been chief executive at Llanelli and the Scarlets.

He also served on the board of European Rugby Cup for 16 years.

Similar tributes preceded Ospreys' game against Treviso as well as other European matches played on Sunday.

It read: "His contribution has been immense for Welsh Rugby - his stature, commitment and determination to fight for what he believed to be right for Welsh Rugby at all levels throughout difficult times was never compromised.

"He has always been a true "rugby man" and for that his standing and respect in the rugby world will be recognised from the many tributes that will undoubtedly be given publicly in coming days, weeks and months.

"Whilst fighting a brave and determined battle against serious illness in recent times, Stuart's passing is a time of great shock and grief for his family and close friends.

"Alongside his passion and love of rugby, Stuart was a great family man and RRW and the four regions pass on their sincere condolences and support to his devoted and supportive wife Jan and his family at this difficult time."

WRU chief executive Roger Lewis said: "Stuart dedicated his life outside his family to the game of rugby and his contribution down the years will prove a fitting epitaph to his commitment and loyalty.

"His understanding and love for the game meant he was always able to contribute positively to important decisions which formed the road map for the development of the sport."

The departing chairman of the WRU, David Pickering said: "Stuart was a giant of a man who made a massive impact on world rugby and his memory will live on throughout the game.

"Nothing could keep him away from his beloved Scarlets and his contribution to their development as a club and region has been highly influential.

"In all his dealings he brought immense rugby knowledge to the table, both in Wales and beyond so the game of rugby owes Stuart a huge debt of gratitude.

"Rugby has lost one of its greatest supporters but Stuart's memory will live on because of everything he has contributed to the game throughout his life."

During his playing career back row forward Gallacher joined Llanelli RFC in 1965 and played almost 200 games, winning a Wales cap against France in 1970.

Later that year he switched to rugby league and joined Bradford Northern before moving to Keighley in January 1975.

During his time at Keighley he played for Wales in the 1975 Rugby League World Cup.

Gallacher, who also served on the boards of the Pro12 and European Cup, stepped down from his role with RRW in June 2014. due to ill health.