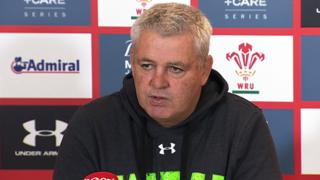 Why I dropped Jones & Hook - Gatland

Wales coach Warren Gatland explains why prop Adam Jones and fly-half James Hook have been left out of his squad for the autumn Tests.

He believes recent changes to the scrummaging laws have "dropped the value of tightheads by half over night" and prefers younger players to the 33-year-old Jones.

As for Hook, Gatland confirms that the fact he plays outside of Wales at Gloucester has hurt his selection chances.

BBC Sport will have live coverage of the rugby union autumn internationals, as well as highlights of England matches, across TV, radio and online.