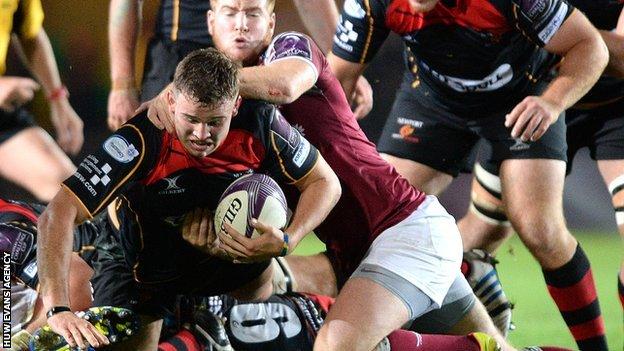 Newcastle fought back from 20-13 down at the break against Newport Gwent Dragons to boost their European Challenge Cup quarter-final hopes.

Matthew Pewtner and Wales star Taulupe Faletau went over for the hosts before Lee Smith responded.

Ashley Smith crossed for Dragons, but tries by Mark Wilson and Will Witty plus Rory Clegg's and Lee Smith's kicks gave Falcons the win.

Dragons lost two experienced forwards from their squad before the kick-off with prop Boris Stankovich absent from the starting side and lock Andrew Coombs from the bench.

But after Rory Clegg knocked over an early Falcons penalty, home captain Lee Byrne limped off to give Aled Brew an early entry.

The first try came to Dragons after 12 minutes when Pewtner scored at the corner following a loop move by Richie Rees.

Angus O'Brien added a penalty early in the second quarter.

Falcons were playing their part in a fast-paced game and snatched the lead back at 10-8 when Lee Smith charged down Hallam Amos's clearance to score, Clegg converting.

But Dragons notched up two more tries by half-time as Faletau drove over from a line-out, Tom Prydie converting.

Then home centre Smith squeezed in at the left-hand corner on the stroke of half time.

Clegg's penalty in between the home tries meant Dragons led 20-13 at the break.

But further first-half injuries saw Dorian Jones on for O'Brien in the home ranks while Falcons brought on Witty and Dan Temm in the pack for Scott MacLeod and captain Will Welch.

Dean Richards' side grabbed 14 points in eight minutes after the restart with Wilson charging through from 20 metres and Witty was gifted a try as Amos failed to clear under pressure, Clegg adding the extras.

Falcons put themselves under pressure with Alex Tait yellow-carded for a dangerous tackle, Tom Prydie slotting over two penalties to cut the deficit to a single point.

The visitors played the referee better though, taking advantage of turnovers and some sloppy Dragons line-outs to ride the storm.

And that was the end of the scoring as Dragons' frantic efforts came to nothing and Newcastle earned their second victory after beating Bucuresti 43-19 in their opener.

However, Dragons were left to ponder falling from the high of a stunning 38-22 success at Stade Francais to being defeated by a team with only London Welsh below them in their domestic table.