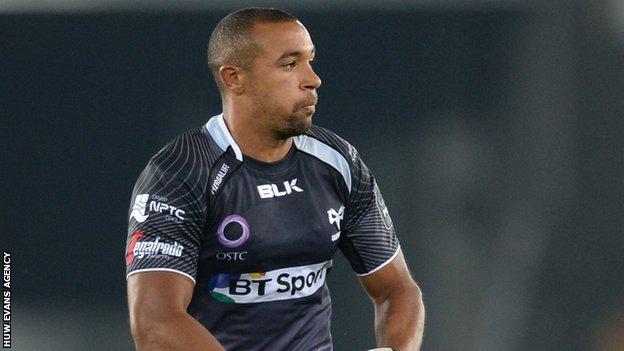 Ospreys will be without wing Eli Walker for between four an six weeks because of ankle ligament damage.

The injury ends Walker's hopes of a late Wales call-up for November Tests.

Hamstring injuries have thwarted Walker's Wales debut hopes in recent seasons and he was omitted from the Wales squad for this autumn's Tests.

However, the ankle blow suffered against Treviso in Ospreys' opening European Cup win means Walker, 22, may not play at all in November.

Ospreys face Northampton at Franklin's Gardens in the second pool round on Saturday.

That is followed by a Pro12 clash with Connacht on Friday, 31 October, LV= Cup games against Saracens and Newport Gwent Dragons in November, then Pro12 encounters with Ulster and Leinster before European competition returns in December.

Ospreys may still be without Walker for the first of back-to-back fixtures with Racing Metro on Saturday, 6 December.

In the meantime Wales face Australia on Saturday, 8 November, followed by Tests against Fiji, New Zealand and South Africa on successive weekends at Cardiff's Millennium Stadium.