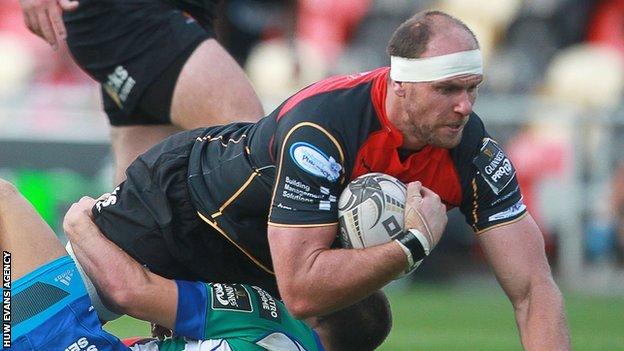 Landman took over as Dragons captain when Lee Byrne limped off early on in the European Challenge Cup game.

"We made two mistakes and it cost us dearly - two charge-down tries," said summer recruit Landman, 28.

That left the South African to ponder what might have been on a night when he felt Dragons held the upper hand against Dean Richards' side.

After a memorable 38-22 win against Stade Francais in Paris to open their European campaign, Lyn Jones' men had hoped to enhance their chances of making the knock-out stages by beating Falcons.

"I'm more gutted now with a loss like this than we were at the Glasgow game because we really played well," said Landman.

"And to play well and lose a game like this when I thought we had the upper hand most of the time, that hurts."

And while Landman was happy at progress in performance standards, he felt it was in vain.

"We played a lot better than we did three, four weeks ago with ball in hand and getting out of our own half.

"But if you don't win the games, what does it help really? We targeted this game.

"You have to win your home games and the away win in Paris gave us a real chance of getting to the play-off stages.

"We want to get to there so every game is vital for us now."

Dragons face Stade Francais' round two opponents Bucuresti twice in December before finishing the pool stages with rematches against the French club and Falcons in January.