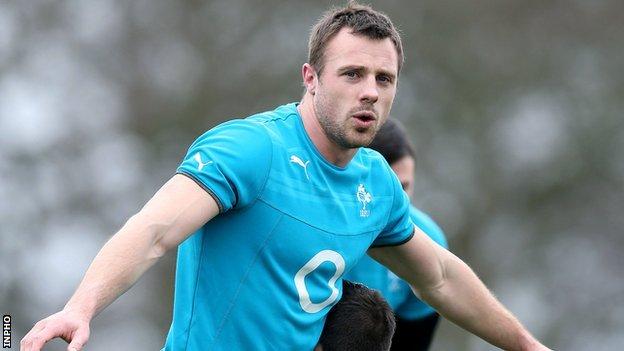 Ulster winger Tommy Bowe is an injury concern for Ireland's opening autumn international against South Africa at the Aviva Stadium on 8 November.

Bowe suffered concussion during his province's European Rugby Champions Cup defeat by Toulon and is following return to play protocols.

Stuart Olding was also concussed during the Pool Two game in Belfast.

Rob Kearney and Mike Ross, who missed Leinster's win over Castres, are set to return to full training next week.

Kearney and Ross have been recovering from back and groin injuries respectively, which they suffered in their province's European victory over Wasps.

In addition, Irish medical staff are assessing a groin injury sustained by Gordon D'Arcy and a statement released by the Irish Rugby Football Unions says he will be "managed over the coming days".

Meanwhile Leinster prop Jack McGrath is understood to have suffered an arm injury at the weekend but took part in training on Wednesday and showed no ill effects.

Munster loosehead James Cronin has not joined up with the national squad however and he awaits specialist feedback on ankle injury picked up in his province's win over Saracens.

His provincial team-mate Andrew Conway was called into the squad for the first day of the Irish training camp at Carton House.

After facing the Springboks, Joe Schmidt's charges play Georgia in Dublin on 16 November and Australia on 22 November.