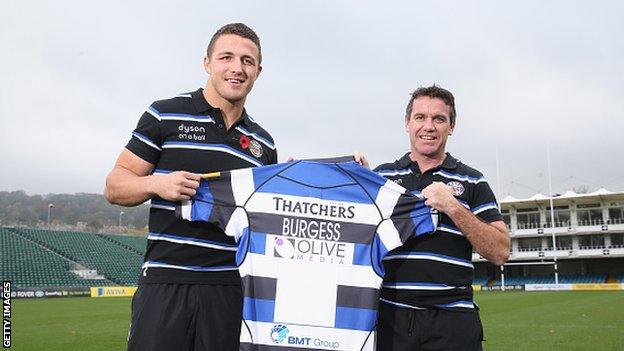 Burgess, 25, completed his move across codes on Thursday after four years in Australia's National Rugby League.

Lancaster said he was "very excited" to have Burgess in contention for a place in England's 2015 World Cup squad.

"He's got the ability as a player, but also as a leader. I think he's got great mental strength." Lancaster said.

Burgess, 25, played on after breaking a cheekbone for South Sydney Rabbitohs in the opening minute of their 30-6 win over Canterbury Bulldogs in the NRL grand final.

And Lancaster says Burgess's man-of-the-match performance in that game in particular shows he can quickly to adapt to the 15-a-side game.

"It's a great signing for Bath, and hopefully for us further down the line," Lancaster said.

"He's got a lot to do in terms of learning the intricacies of rugby union. But if there's a man that can do it I think he can.

"What he put himself through in the final - his mindset to deliver and pay back the faith that the Rabbitohs had shown in him - set him apart really.

"But he's in a competitive position and he'll have to earn the right to get into our [England] team. But if he gets in our squad I'm sure he'll make an impact."

Burgess is still recovering from the injury he suffered in October's grand final and says he is still unsure when his Bath debut might be.

Bath head coach Mike Ford echoed Lancaster's comments, saying Burgess's mentality can take him "all the way to the top, to international rugby".

But he said he is yet to decide which position Burgess will play in for the Aviva Premiership side.

"He's gone out to Australia and actually been the best player in the competition, and that takes some mental strength to do that.

"It's important we play him in a position that utilises his skill-set to the full potential."

He told BBC Radio 5 Live he doesn't want to get "caught up in the hype".

"Sam has to come out and prove himself," he said. "The timeframe does scare me - can someone be fast-tracked so quickly?"