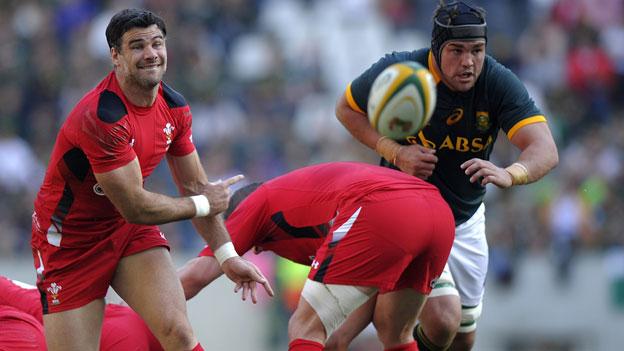 Martyn Williams believes Warren Gatland should back the players who gave South Africa a scare in the summer when he announces his team to face Australia.

Gatland's side face the Wallabies in Cardiff on Saturday, with the team announced at 12:00 GMT on Tuesday.

"I'd back the boys who played in that second Test in South Africa," said former Wales flanker Williams.

"And I'd pick Mike Phillips because Rhys Webb is a better impact player."

Two of the side that came so close to winning in Nelspruit will definitely not face the Wallabies - Scarlets hooker Ken Owens is injured and Scarlets back-row Josh Turnbull is not in the squad.

In addition Jonathan Davies is a doubt with a shoulder injury, thought he official view from the Wales camp is not as pessimistic as the statement by his club Clermont Auvergne which said he would definitely miss the game.

Another complicating factor as Wales look to end a run of nine consecutive defeats against Australia is the number of front-rank players back in contention after missing the summer tour with injury.

One of those - Gloucester hooker Richard Hibbard - is a ready-made replacement for Owens in the front row, while Sam Warburton is likely to lead the side from open-side and Leigh Halfpenny return at full-back at the expense of Liam Williams.

However, that selection may change if Jonathan Davies and his former Scarlets team-mate Scott Williams - recovering from a hamstring strain - are both unfit.

That scenario raises the possibility of George North moving to centre - as he did in the corresponding fixture in 2013 - with Scarlet full-back Williams taking Northampton player's place on the wing.

Dan Bigger seems likely to retain his place at fly-half ahead of fit-again Rhys Priestland after a string of impressive displays for the Ospreys in their unbeaten start to the Pro 12.

At scrum half Gatland faces a choice between 87-times capped Mike Phillips and Ospreys' Rhys Webb.

Phillips impressed against South Africa last time out, but has made only two starts for his club Racing Metro this season while Webb has been impressive for the Ospreys.

"It was one of the best performances we've ever seen from a Welsh team," said Martyn Williams.

"Defensively Mike Phillips is so important in the Welsh team and they wouldn't admit it, but I think most of the time the selection is based on defence first and then attack second.

"Wales need to win this game and I'd go with Mike to start and Rhys to come on."

Williams expects Warburton to be partnered by Taulupe Faletau and Dan Lydiate in the back row and Wales to play a tight game.

"If we play a game of open field Super XV rugby against Australia we'll come off second best," added Williams.

"The best way to beat Australia is the way the Lions did in the third Test [in 2013] and basically pummel them.

"The more more it opens up the less chance Wales have."

In the front row Samson Lee is favourite to play at tight-head in place of the discarded Adam Jones - as he did against South Africa - with loose-head Gethin Jenkins facing a challenge from Paul James.

In the second row Alun Wyn Jones' partner could be Scarlet lock Jake Ball with Racing Metro's Luke Charteris released back to his club,with Bradley Davies's appearances for London Wasps limited by injury.