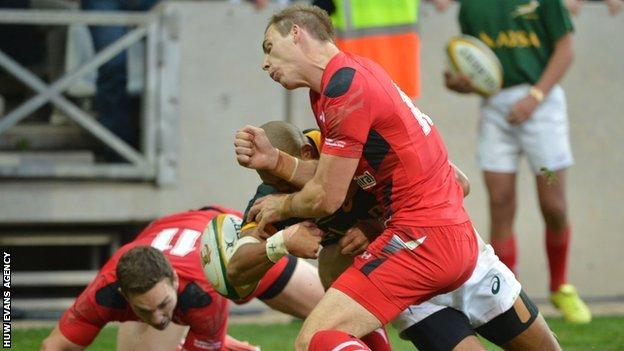 The Wales backs coach says the Scarlets full-back, who switches to wing against the Wallabies can "create something, sometimes out of nothing".

But Williams conceded a winning penalty try against South Africa in June, leading to Howley's concerns.

"International rugby is not having a yellow card or a red card, it's having 15 men on the park," said Howley.

"And that will be key for both sides on the weekend.

"That's the bottom line in terms of your starting point in the international game; discipline is huge."

Williams produced a man-of-the-match display in Wales' 51-3 Six Nations win over Scotland in March, scoring a try in an outstanding display after taking over from then-injured Leigh Halfpenny.

That helped earn him his fellow Welsh professionals' 2014 player of the year award and he faces Australia from the wing amid a back division reshuffle.

But after his illegal, shoulder-charge tackle on Springboks wing Cornal Hendricks that led to the penalty try being awarded, Williams apologised to his team-mates.

He had also been sent off after being cited for tackling a Blues opponent in the air during a Pro12 game in April.

Williams was yellow carded for that offence and later sent off after coming to blows with then-Blues number eight Robin Copeland and picking up a second sin-binning.

The incident against South Africa on 21 June helped deny Wales what would have been only their second win over the Springboks.

And his first Pro12 game for Scarlets this season, a 32-32 draw against Ulster, ended with Williams being sent off for two more sin-bin offences.

Howley said Williams was also close to being sin-binned in their first South African tour Test defeat in June.

"We had a really hot debrief and Liam was part of that in terms of the South African game and going back to the first Test against South Africa, possibly there could have been another yellow card," Howley added.

"But I've got no doubt in attack that he's got the creativity, the speed, hopefully, to create something, sometimes out of nothing, but also be organised in our attack and hopefully have high numbers against low numbers."

Howley hopes Williams can showcase the best of his talents and whole-hearted approach against the Wallabies, this time from the wing.

"He's got a heart like a lion, [but] his ability sometimes, really, to go outside that little box and his emotional control and intelligence is important on the weekend."