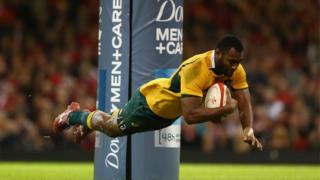 In a breathtaking first half, Rhys Webb's early try put Wales ahead but Australia soon hit back through two scores from Israel Folau and the teams were level 21-21 at the break.

Man-of-the-match Bernard Foley kicked 18 points, the most crucial coming in the final minutes as he sent over a drop-goal and then a penalty which sealed the win for the Wallabies.