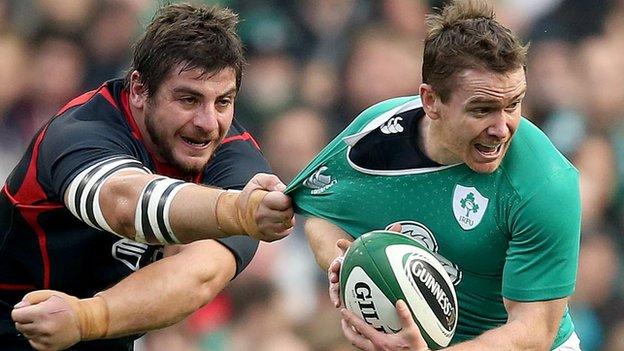 Ireland's virtual reserve team scored six tries in the second half to see off a dogged Georgia in Dublin.

Ireland finished strongly with a Simon Zebo try, two for full-back Felix Jones and the final one from Stuart Olding.

Coach Joe Schmidt had made 13 changes from the previous week's win over South Africa, calling on the new faces to stake their claims for places in next year's World Cup squad.

However, it was Georgia who had a chance to take an early lead only for Merab Kvirikashvili to drag his penalty wide.

Ireland had made several breaks without managing to finish any of them, the best chance ending when Tommy O'Donnell spilled the ball while stretching for the line.

Irish debutant Dominic Ryan was fortunate to avoid serious injury when he received a stud to the face, referee JP Doyle rejecting captain Eoin Reddan's call for a video review.

Ireland really got into the stride in the second half, with Kilcoyne driving over for his first Test score.

However, Georgia scored the next try when, from a penalty line-out, lock Nemsadze found a gap in the Irish defence.

Lasha Malaguradze took a heavy bang to the head in the build-up to Zebo's try, receiving lengthy on-field treatment before being carried off on a stretcher.

Full-back Jones finished a smart Ireland move next, before capping a field-length break launched by a smart turnover from debutant replacement Robin Copeland.

Replacement centre Stuart Olding then added gloss to the scoreline late on as Schmidt's men completed their expected victory.