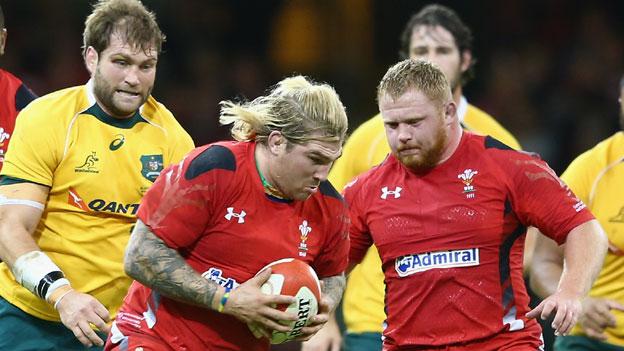 Wales hooker Richard Hibbard has been released to Gloucester for the Premiership match with Harlequins.

But there has been no deal with the English club to release the former Ospreys player for the Test against South Africa on 29 November.

The game is outside the International Rugby Board window and teams outside Wales do not have to release players.

"He's been released back and he's on the bench for Gloucester," said Wales defence coach Shaun Edwards.

Hibbard started in the 33-28 defeat against Australia in the opening autumn Test match.

He is rested for the match against Fiji on Saturday, 15 November, but will return to the Wales squad for the visit of the All Blacks the following week.

That match is followed by a Test against the Springboks when only George North of the English-based players will be available for selection.

Saints were fined a one-off £60,000 by Premiership Rugby in December 2013, after North played for Wales against Australia outside the 2013 autumn window.

However Hibbard, Paul James (Bath) and Bradley Davies (London Wasps) will not be allowed to play for Wales.

But Edwards said no deal had been done with the English clubs, saying: "It's a bit different in the Premiership isn't it."