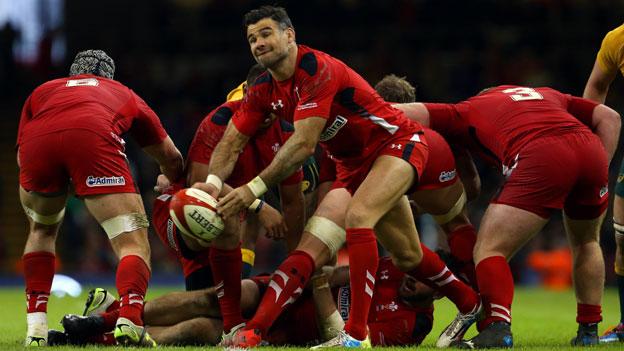 Wales coach Warren Gatland says his team are playing for places against the All Blacks when they take on Fiji.

New Zealand face Wales on 22 November, a week after Fiji's visit to the Millennium Stadium.

Gatland has made eight changes from the team beaten 33-28 by Australia, and says there is a clear incentive.

"Those playing are probably thinking a good performance... is going to put them in the front seat [for] selection against the All Blacks," he said.

"From that point of view you must be excited as a player having that opportunity of playing against Fiji with a chance of being selected against the All Blacks."

Wales also face South Africa in the last of their four autumn Test matches on 29 November, when all-but-one of the England-based players will not be available.

Northampton Saints' George North is available for that match, which falls outside the International Rugby Board window.

However, Richard Hibbard (Gloucester), Paul James (Bath), Bradley Davies (London Wasps) and James Hook (Gloucester) will not be allowed to play for Wales as the clubs do not have to release their players.

For Gatland, the absence of so many players for the visit of the Springboks is another incentive for individuals against Fiji.

"That's part of the opportunity - realising the players aren't going to be here for the fourth game [and] everyone [else] is going to be in contention," he said.

The New Zealander was positive about Wales' performance in the opening autumn Test, in spite of them slipping to a 10th consecutive defeat against the Wallabies, and is looking for a similar performance against the Pacific Island side.

However, in their last meeting, Wales scored nine tries in a 66-0 thrashing during the 2011 World Cup in Gatland's home town of Hamilton, New Zealand.

"It's about momentum," added Gatland.

"It's about ourselves concentrating on knowing what they are going to bring to the table.

"I thought the way we played against them in 2011 in Hamilton was an absolutely outstanding performance.

"We dominated in all facets of the game, we also played some really positive rugby and scored some great tries and that's got to be the challenge for us on Saturday."