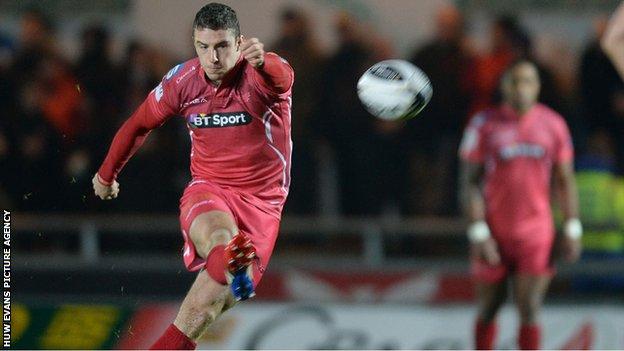 Steven Shingler's conversion and four penalties made up the rest of the Scarlets points as the contest came to life late in the game.

The scores had been level on the hour when Glasgow fly-half Peter Horne kicked his third penalty.

But the home team, with flanker James Davies and full-back Steffan Evans outstanding, hit back strongly.

The result sees Glasgow drop to fourth in the table after Munster's bonus point win at Newport Gwent Dragons and Ulster's home success over Ospreys.

Scarlets were disrupted before the kick-off when Regan King - set to make only his second start of the season - had to withdraw with an injury.

Rhys Priestland, released by Wales, stepped into the fly-half place with Steve Shingler moving into midfield in place of the former All Black centre.

Glasgow were forced into a front-row re-shuffle after barely 20 minutes as tight-head Zander Fagerson fell foul of referee David Wilkinson.

Scarlets were further disrupted when captain John Barkley took a blow to the head and had to be replaced in a half which saw Shingler kick three penalties to Horne's one for a 9-3 interval lead.

The Warriors, beaten just once in the league before this match, upped their game early in the second half with Niko Matawalu on at scrum-half sparking a series of attacks.

The result was two further penalties for Horne as the visitors seemed poised to take control.

But the Scarlets rallied strongly with first Harry Robinson and then Steven Shingler denied by last gasp tackles.

Shingler edged the home team ahead with his fourth penalty and had the simplest of conversion when Scarlets' late ascendancy was rewarded when substitute Pitman plunged over near the posts for the decisive score.

Scarlets coach Wayne Pivac told BBC Radio Wales: It was always going to be a bit of a graft in those conditions and I thought the boys put pressure on at the right end of the field and we kicked those goals to take a 9-3 lead.

"We might have blown a couple [of try chances] there. Steff Evans has made a great run and probably should have given the pass and we would have been in.

"They [young players] are doing well and taking their opportunities and putting some pressure on."