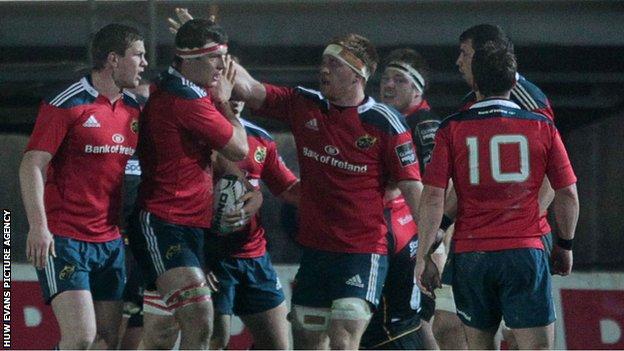 Munster kept up their top four challenge with an emphatic second half performance earning them a bonus point.

Rhys Jones landed four penalties for the Dragons who folded after leading 9-7 at half time.

The Dragons welcomed back Hallam Amos from the Wales squad while South African prop Brok Harris made his home debut in a side led by compatriot Rynard Landman, standing in for Lee Byrne.

Munster were without eight players on Ireland duty but fielded fly-half Keatley and former Blues number eight Copeland, who'd made his international debut against Georgia.

It was Copeland who grabbed the only try of the first half after 16 minutes, ploughing over from a metre out after forward pressure, with Keatley converting.

But although the Dragons couldn't find a way through the Irish defence in the first half, fullback Geraint Rhys Jones landed three penalties from four attempts to give them a narrow 9-7 lead after a low-key first 40 minutes.

But Munster came out firing after the break and Keatley landed a straight 40 metre penalty before converting a 46th minute try from hooker Duncan Casey, driven over in the left corner by his fellow forwards.

Centre Andrew Smith sped over for their third try following JJ Hanrahan's break, Keatley adding the simple conversion to make it 24-9 after 63 minutes, before Jones interrupted the flow of Munster points with a fourth penalty.

The bonus point try seemed only a matter of time as the Dragons failed to produce any real defiance and Casey, a late addition to the starting side, again benefitted from a lineout catch and drive with Keatley on target once more.

Ronan O'Mahoney ran onto a cross kick to put the icing on the cake with Munster's fifth and Keatley's conversion saw the Rodney Parade fans heading for the exit.

Dragons director of rugby Lyn Jones told BBC Radio Wales: "I thought the first half of rugby was as good as we've produced without scoring a try. We were clinical, accurate and technically far superior to Munster and turned around at 9-7 up and it could have been a bit more, but we got blown away in the second half.

"The kicking game with Munster was highly effective again, their error count was low and they played percentages and they have a formula for coming away and winning Celtic League games.

"They caught our back three out and hit the corners and we struggled to get away from that and spent most of the half in our half."