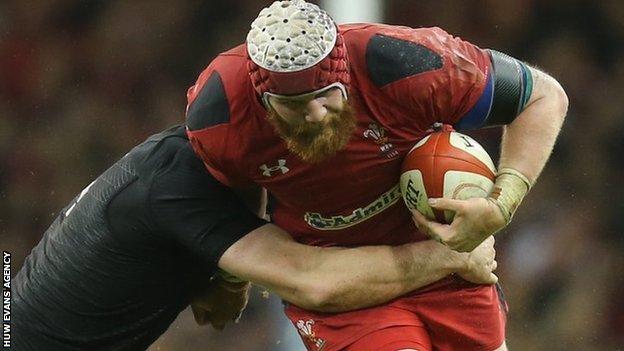 The Scarlets lock also says Wales should have ended 61 years of defeats by New Zealand and beaten them in Cardiff at the weekend, not lost 34-16.

Wales' record against the Springboks - one win, in 1999 - is even worse than it is against the All Blacks.

But asked what worried him about South Africa, Ascot-born, Australian-bred Ball, 23, replied: "Nothing."

Ball, who once dreamed of playing cricket for Australia and then harboured Super Rugby ambitions with Perth-based The Force in Australia, qualifies for Wales via his north Wales-born father.

Since arriving at Scarlets in 2012, he has won seven caps and kept Racing Metro's Luke Charteris out of Wales' starting XV against the All Blacks.

Ball said he and his team-mates should have beaten Richie McCaw's side, who ended up five-tries-to-one winners.

"It's fantastic to test yourself against the best and to think that really we should have won that game.

"We should have finished it off and won.

"So it's just showing that we aren't far off and that the game was there for the taking."

Wales had led 16-15 after 69 minutes, before Beauden Barrett gathered his own kick to score after the bounce of the ball beat Leigh Halfpenny.

Seconds later Kieran Read charged down replacement Mike Phillips' kick to score in the corner to put the game beyond Wales.

But Ball says Wales should "be positive" saying: "We played the best team in the world and we've been winning after 70 minutes.

"They've had a little bit of the bounce as well… I thought as a team we defended really well so I think if we defend like that against South Africa, they're not going to have much ball to play with."

Ball says Wales must ensure they can control the dying stages against South Africa, instead of letting the contest slip, as it did against New Zealand and Australia on 8 November.

He said: "For us it's just a case of controlling the game: last 10 minutes getting the set piece right, controlling it, kicking for territory, putting them in their half and playing in their half; don't let them play in our half."

Wales coach Warren Gatland hopes his side can end a 22-match losing streak against the major southern hemisphere nations when they take on the Springboks.

The New Zealander says none of the northern hemisphere's major teams' overall records against the All Blacks, Springboks and Wallabies make "pretty reading".

He made the statement when asked by the BBC if he felt under pressure because of Wales' record under him against those three teams.

Gatland replied: "If you look at England's record or Ireland's record or Scotland's, it's slightly better, but it doesn't read pretty reading for all of the northern hemisphere teams.

"So yeah, of course, you always feel under a bit of pressure - you want to do that [win].

"But like I said, I'm proud of that display for 69 minutes [against New Zealand] in terms of we were in front and the boys are disappointed, but that's international sport, isn't it? You always feel under pressure.

"And it's a good question to put me under a bit of pressure as well, isn't it?