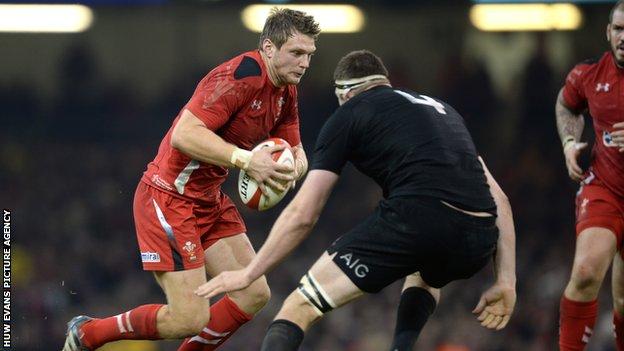 South Africa outside-half Pat Lambie says the Springboks will find it tough to contain opposite number Dan Biggar on Saturday.

Lambie was impressed by the Ospreys player's performance for Wales in the 34-16 loss to New Zealand.

"He was chasing high balls and really put his body on the line, so we'll definitely have our hands full from a back line perspective on Saturday."

Wales had led 16-15 after 69 minutes as they aimed to beat the All Blacks for the first time since 1953, before conceding 19 points in eight minutes.

Their record against the Springboks - one win, in 1999 - is even worse than it is against world champions New Zealand.

Warren Gatland's side were denied a first Test win against South Africa away, late on in June.

He feels his side are "capable" of getting their first southern hemisphere scalp since beating Australia in 2008, in Cardiff on Saturday.

South Africa will be without the back three who started the 22-6 win against Italy because of players' club commitments.

Springbok defence coach John McFarland says he expects Wales to test their new back trio in Saturday's Test in Cardiff.

"I think they'll certainly test our back three," said McFarland.

"Obviously with Bryan [Habana] and JP [Pietersen] going, there will obviously be different wings.

"I wouldn't like to pre-empt and say who is playing, but I would expect them to target us there.

"They do kick contestable, they do kick high. (George) North and (Alex) Cuthbert do chase well. We know we're in for a test there, definitely."

Wales have beaten Fiji but lost to Australia and New Zealand during this November's autumn series.

South Africa meanwhile lost against Ireland but have beaten England and Italy.

That loss to the Irish was the Boks' first defeat in the northern hemisphere since 2010.

McFarland says the Springboks are motivated to end their tour on a high against the Welsh.

"We are desperate to beat them as well, believe me," said McFarland.

"I think we learnt some lessons against Ireland that we'll take forward.

"We are clearly second in the world. Our goal is to be number one."