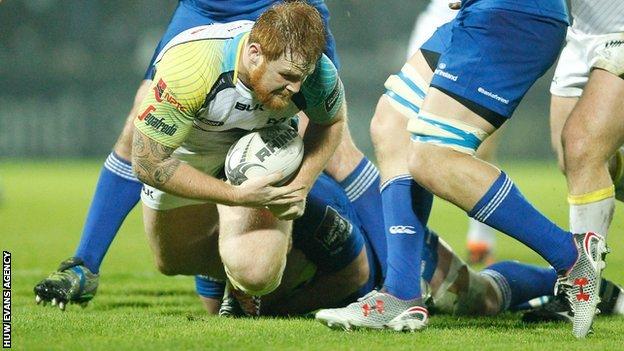 Three penalties apiece from Ian Madigan and Jimmy Gopperth helped Leinster see off Ospreys in the Pro12 in Dublin.

Madigan's shots at goal came before he left the fray at the break.

Gopperth took over the kicking duties and also won his duel with Ospreys' fly-half Sam Davies.

The latter kicked three first half penalties and a fourth in the second period, but with 19 players either injured or on Wales duty, Ospreys earned a losing bonus point.

Leinster's win boosted their hopes of making the top four play-offs at the end of the season.

But the losing point meant Ospreys going back into second place in the table as they contemplated a second successive defeat against Irish opposition.

Prior to losing against Ulster in the previous round, the Swansea-based region had been unbeaten.

Leinster were held to a draw away to Treviso in their eighth-round game and with the scores tied at 9-9 against Ospreys at the break, another deadlocked contest looked possible.

However, the hosts edged the second period against youthful opponents, particularly at the scrums as the game wore on.

Damp conditions made for a forward-orientated game.

Davies kicked Ospreys into an early lead, but it was the only time in which they led, although they made Leinster battle hard for the win.

Gopperth kicked the two decisive penalties in the last 10 minutes to reward his side's perseverance against their gutsy opponents.