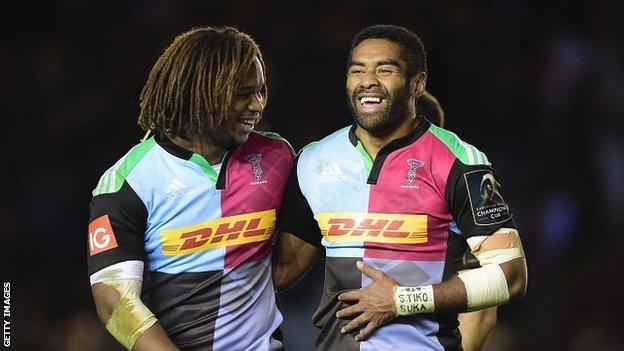 Harlequins remain on target for a quarter-final place in the European Champions Cup after a hard-earned victory over Leinster at the Stoop.

The score was 9-9 at half-time after three penalties apiece.

But Nick Easter and Asaeli Tikoirotuma scored second-half tries as Quins remained unbeaten in the competition.

Quins lead Pool Two with 12 points, three ahead of Irish side Leinster and four points clear of English rivals Wasps.

It was the first meeting between Quins and Leinster since the infamous 'Bloodgate' encounter in 2009, which Leinster won 6-5.

Ian Madigan and Nick Evans exchanged penalties in the early stages, when it became apparent that the Leinster scrum was seriously overmatched.

England captain Chris Robshaw, playing his 200th match for Harlequins, also had a big game but it took until the 54th minute for the hosts to breach Leinster's try-line.

Wing Marland Yarde was stopped just short before number eight Easter produced a sublime finish, touching the ball down while on his back.

And when Rob Kearney's pass to Zane Kirchner was picked off by Tikoirotuma, the Fijian wing crossed after a 70-metre sprint to the line.

Madigan slotted successive penalties to narrow the deficit to six points but Danny Care's late drop-goal made the result a formality.

Harlequins director of rugby Conor O'Shea: "We've not hit our straps but it's only half-time in Europe.

"It's a great start, we know what's coming next week [at Leinster]. They're a great side so I'm really proud."