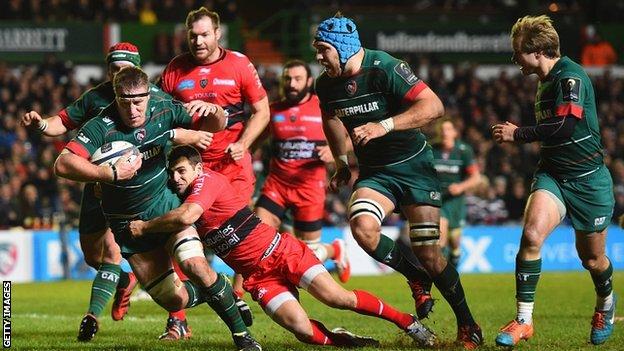 The hosts led 13-0 after a rare try by veteran lock Brad Thorn but Toulon were level at half-time following an interception try by wing Bryan Habana.

Richard Cockerill's side play Toulon again at the Stade Felix Mayol next Saturday.

Leicester started strongly at Welford Road and 22-year-old Williams gave the hosts the lead after Toulon infringed at the scrum.

And when Mitchell failed to cope with a speculative kick from Mathew Tait, hooker Tom Youngs picked up the loose ball and fed former All Black Thorn for a try.

Nicolas Sanchez reduced Toulon's deficit with two penalties before Habana seized on a loose pass by Williams and sprinted home from 50 metres.

The visitors went ahead after scrum-half Sebastien Tillous-Borde broke through the Tigers defence and sent Mitchell over unopposed.

A fourth Williams penalty edged Leicester back in front, before the Welshman added another.

Sanchez reduced the deficit to one point with a three-pointer of his own before Williams made sure of a Tigers win with a kick from the halfway line.

Leicester rugby director Richard Cockerill: "It's a great win. It is the best we have probably played for 18 months.

"It will be twice as hard to go there and win next week. Toulon will be really cheesed off, and it really doesn't get any more difficult than that."

Toulon prop Martin Castrogiovanni: "Everyone wants to win against us. We are the best. We have won everything, and it is normal for other teams to raise their game.

"Leicester played a very good game, but they have only won a game. Now they need to come to us, and we will see. We will see next week what is going on."