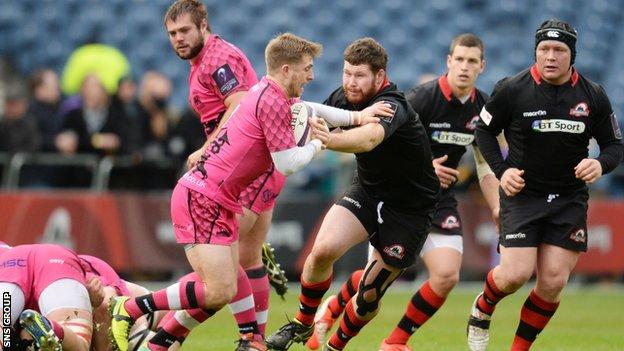 Edinburgh ran in three tries to come from behind against London Welsh at Murrayfield and stay top of Challenge Cup Pool 4.

Winger Rhys Crane ran in an intercept try to set up a 13-6 half-time lead for the visitors.

But WP Nel touched down immediately after the restart.

And Neil Cochrane and Rory Sutherland added scores in the final 15 minutes to make sure London Welsh remain without a win in any competition this season.

Boasting a 100% record at the halfway stage, Edinburgh lead Bordeaux-Begles by one point.

Tom Heathcote kicked the home side into a second-minute lead but Gordon Ross - returning to his former club - levelled before the game's opening try.

Crane snaffled up a loose pass to race away, with Ross adding the extras, although the scorer was sin-binned six minutes later for taking out Tom Brown in the air.

Heathcote cut the deficit with his second penalty but the depleted Exiles re-established a seven-point lead with Ross again on target.

A poor first half for the hosts ended with Heathcote pulling a penalty wide.

However, the mood of home supporters improved in the opening minutes of the second period when tighthead prop Nel crashed over, although Heathcote was again off-target with the conversion attempt.

Substitute hooker Cochrane crossed for Edinburgh's second try following a long passing sequence as the hosts ramped up the pressure.

And the fading London Welsh challenge was extinguished when Sutherland touched down after a powerful surge from Roddy Grant. Sam Hidalgo-Clyne added both conversions.