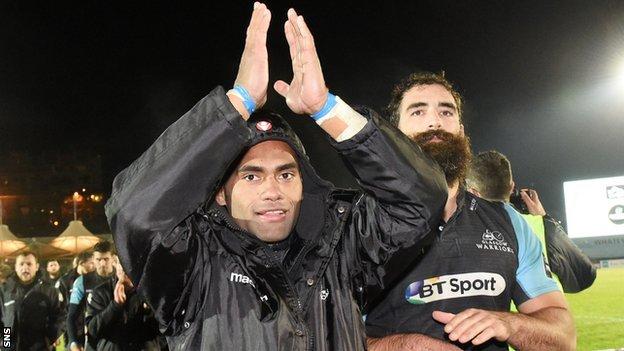 Braid has agreed a contract with the English Championship side until the end of the season but will be loaned back to Warriors during the Six Nations.

Warriors head coach Gregor Townsend said both had made "a big impact".

"Leone has worked really hard in training to adapt to the 15-a-side game, having predominately played sevens before arriving in Glasgow, and he's now a regular in the Fiji national squad," he said.

"Josh is part of our leadership group and has captained the side. He will continue to have a big role to play at the club both on and off the pitch."

The new deals come a week after backs Stuart Hogg and Lee Jones also penned deals until May 2017.

Strauss, who will become eligible to play for Scotland in September, has made 56 Warriors appearances since leaving Super League rugby with Lions in September 2012.

"I've learnt a lot working with the players and coaches at Scotstoun and it was a good decision to move to Glasgow from South Africa," he said.

"I've enjoyed the last three years at the club, I've developed playing in the Pro12 and European Rugby Champions Cup and I'm happy to be staying.

"I'm ambitious and I want to win trophies and I believe I have the best chance of doing that at the Warriors."

Nakarawa has made 30 appearances since joining Glasgow in summer 2013 after representing his country on the Sevens circuit.

"Signing my first professional contract with Glasgow was a big move for me and I'm really enjoying playing for the club and I'm very happy living in the city," he said.

Braid, who can play at fly-half, centre and full-back and had represented his county at Sevens at the Commonwealth Games before joining Warriors in August, was sent on loan to London Scottish in October.

Townsend said that the 24-year-old, who has only made three competitive appearances for Warriors, would get more regular game-time permanently with the Exiles.

Braid added: "I've really enjoyed my three-month spell at Glasgow Warriors and was delighted to sign-off with a win on Sunday against the Dragons."