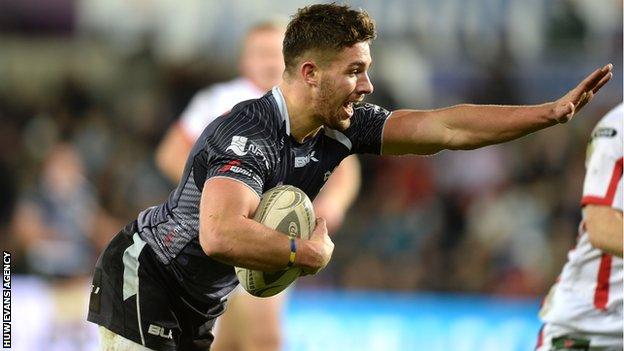 Rhys Webb scored two tries as Ospreys dominated during a bonus-point win over Ulster to return to the top of the Pro12 table.

Wales scrum-half Webb added a second and wing Hanno Dirksen also powered over after the break.

Rob Herring and ex-Osprey Tommy Bowe hit back, but the hosts denied the visitors a losing bonus point.

To make matters worse for the visitors, they lost influential Springboks star Ruan Pienaar to an apparent knee problem before half-time although there was no news on the extent of the injury after the game.

Ulster were level on points with Ospreys ahead of the weekend's games, but they were left in fifth place in the table after the home side's decisive first hour.

Steve Tandy's side took a direct, off-loading approach and it paid dividends as skipper Alun Wyn Jones set fellow Wales star Biggar free for the opening try after he and opposite number Ian Humphreys had exchanged early penalties.

And with Biggar going on to convert all four Ospreys tries, Ulster were up against it despite a history of close encounters between the two teams.

Webb's second try heralded the debut of Wales flanker Dan Lydiate, who came off the bench after moving from Racing Metro.

Dirksen took advantage of the time and space created by a scrum drive to gather momentum before powering over with desperate Ulster defenders clinging on.

Replacement Ulster hooker Herring gave his side hope as the visitors produced the sort of line-out power play for which they are renowned.

Humphreys converted and added another after Bowe cut through Ospreys' stretched defence.

Another Ulster try would have left the outcome on a knife edge, but Ospreys regained control of the game's tempo to thwart the visitors' hopes.