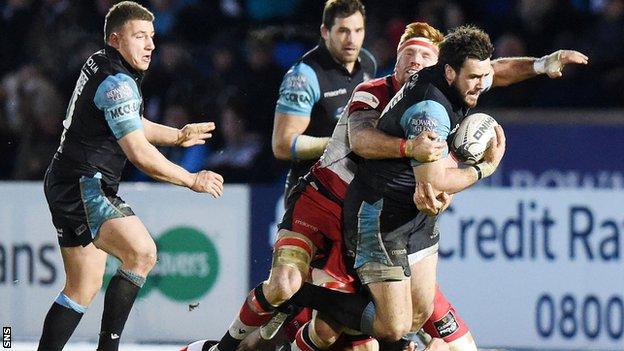 Glasgow centre Alex Dunbar insists winning the 1872 Cup is his side's sole focus when they face rivals Edinburgh on Friday at Murrayfield.

Warriors take a 16-6 lead to the capital from the first leg.

And while points remain precious for Glasgow, who are second in the Pro12 table, lifting the silverware is their priority in Edinburgh.

"It's all about the 1872 Cup, we need to start well and impose ourselves on the game," said Dunbar.

"That's our first focus but we know how tight it is at the top of the table, with four or five teams within a couple of points of each other, so we know the points matter going forward to the end of the season and this could make the difference.

"We know how tough it's going to be, they're always close encounters so we know we have to really give it a go. We can't rely on the 10-point cushion we've got."

Dunbar admitted his side fell short of their usual high standards in a scrappy first leg at Scotstoun, and he expects an improvement at Murrayfield.

"We were delighted with the win, the boys, especially the forwards, put in a massive effort," the 24-year-old added.

"It wasn't much of a game for the supporters, it was stop-start, but we're delighted with the start to the 1872 Cup.

"It was a bit frustrating that we couldn't impose ourselves more on the game, but there's a lot of things to look forward to this week and work on."