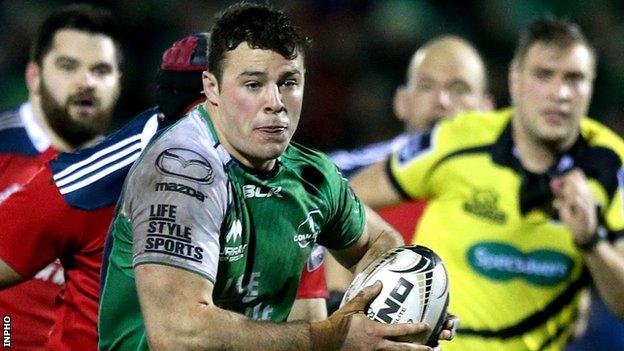 Connacht claimed the prized scalp of provincial rivals Munster by fighting back from 13 points down to clinch a memorable New Year's Day win in Galway.

It was their first win over Munster since December 2008 and extends their unbeaten home record to eight games.

Peter O'Mahony's 10th-minute try and 11 points from the boot had Munster 16-7 up at the interval.

Kieran Marmion's first-half try for Connacht was added to after the break by Craig Ronaldson and Aly Muldowney.

Connacht are up to fifth in the Pro12 table while third-placed Munster are three points behind the leaders Ospreys.

Ian Keatley, the former Connacht fly-half, used his knowledge of the famed Sportsground wind to help Munster to a 13-0 lead by the quarter-hour mark.

He converted after O'Mahony had powered over for his try and kicked two penalties in difficult conditions.

Then, a superbly engineered try by Marmion - started and converted by Ronaldson - got Connacht back in touch.

Keatley's third successful penalty made it 16-7 to the visitors at half-time, only for wind-backed Connacht to respond with 17 unanswered points in the third quarter.

Well-worked tries from fly-half Ronaldson and lock Muldowney were both converted by Darragh Leader, with Ronaldson's replacement Miah Nikora landing a 55th-minute penalty.

Although they threw everything at Connacht in a gripping climax, Munster endured a scoreless second half thanks to some defiant, disciplined defending by the hosts.